I’ve thought about doing this post for a while, and in all honesty it will likely not be the last one of these I do.  But having a daughter that I’ve tricked into loving reading possibly more than I do, I can’t help but reexamine the stories and poems and songs that I enjoyed or read as a child and wonder, “Are these still relevant?”

For now I’ll start with this book: 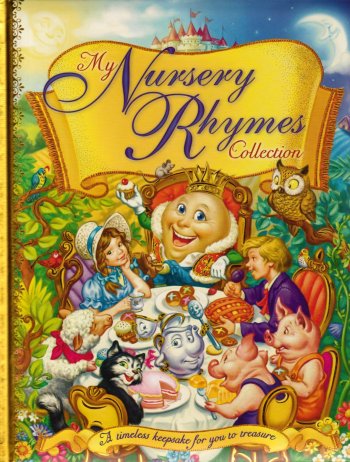 because it is my daughter’s current favorite.  It has almost 200 pages of nursery rhymes and was a lovely baby shower gift that my 17 month old now adores.  I like it well enough, too, but I do have a few issues….

Or the fact that they get the words to things like “Fuzzy Wuzzy” and “I’m a Little Teapot” slightly wrong.  We’ll also (for the moment) ignore the fact that in 184 pages not a single person of color appears in the entire book.  Not one.  And I feel like at this point you could make even a tiny effort at inclusion, but that’s a fight for another day.

We’ll ignore all the problems with this picture…

Like why Jack’s eating turkey leg if he can’t eat fat, and why his wife appears to have some white meat in front of her.  OR where they got that leg since this bird hasn’t even been cut yet, but I digress….

Today I’m fighting about poems I don’t really want my daughter to read, even if I read them as child.  There are two in particular that I just can’t do.

“Little Sally Waters” is a new one to me.  If goes like this: 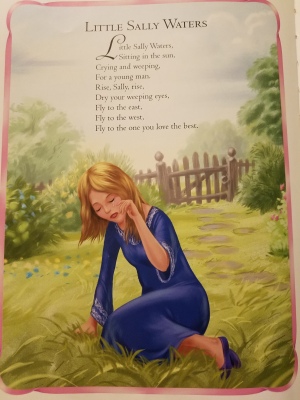 Little Sally Waters,
Sitting in the sun,
Crying and weeping,
For a young man.
Rise, Sally, Rise,
Dry your weeping eyes.
Fly to the east,
Fly to the west,
Fly to the one that you love best.

I’m really not thrilled about the idea of a girl sitting around in a field somewhere just crying about a boy.  And the only solution is to run around until you find him again and then all will be well.  First of all, if that is a solution, why not just do that instead of feeling sorry for yourself.  Also, what is even the story here that I’m supposed to want her to find Mr. Mappoint?  I’m not convinced he’s worth it.

I’ve been sorely tempted to take a black marker to her head and add a witch’s hat so at least when she’s flying east and west she can be a cool chick with powers.  At least that’s something.

But Sally still doesn’t make my stomach squirm and incite my anger the way that “Georgie Porgie” does…. 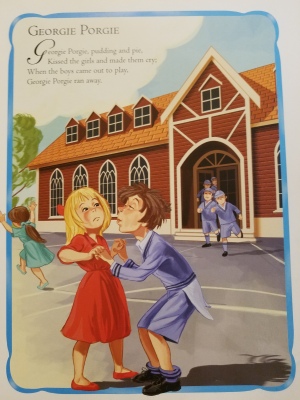 Georgie Porgie, pudding and pie,
Kissed the girls and made them cry;
When the boys came out to play,
Georgie Porgie ran away.

Like…what the actual F?  First of all that picture ain’t helping anyone feel okay with what’s happening in this poem.  That’s some assault happening right there and good on the other girl for getting the eff outta there, but this is not exactly the kind of thing I like my daughter looking at, you know?

Not only is Georgie a future date rape waiting to happen, but the girls have to bank on the presence of the other boys to save them from Georgie’s ill intent.  (I mean, even his shadow looks like a monster.) While I appreciate that boys have a role to play in helping to make sure their fellow humans are safe from people that wish to do them harm, I don’t want my daughter growing up and thinking that she needs a boy to protect her from someone like Georgie.  Not because the boys scaring Georgie away are bad in any way, but as any female can tell you from experience, you can’t hang around and hope some nice guys show up to scare the bad guys away.  You need to have a plan and a back up plan and a little bit of taekwondo wouldn’t hurt either.

Boys like Georgie are why my husband insisted before we even had a girl that all our children take classes to teach them to defend themselves. (And it’s not just me that doesn’t like these 2.  Hubby doesn’t like them either.)

I don’t like that this poem is in the book, and I especially despise the illustration.  I refuse to read it to baby girl when we get to that page, even though she likes the sound of that one and has no idea what it means yet.  She will one day.  I remember it from my childhood, though I don’t think my parents ever did that one with me.  Hopefully when A grows up she’ll remember her mom teaching her that some things are outdated, and it’s okay to let them go.

So for now we’ll skip over them and refuse to read them, but they’re going to keep bugging me, and at some point when she’s older we’re going to have to have a chat about at least one of them.  My parents did a good job of raising me and exposing me to lots of books.

Hopefully though I can take their lessons and build on them when I’m teaching my daughter.